After the rocking party hosted by Western Yodhas @Toast, Uttar Ke Puttar(UKP) took over the charge for holding fun events in Vinove for the next couple of weeks. So, the first event was held to celebrate our India’s 64th Independence Day. Vinove celebrated Independence Day on 13th August 2010. 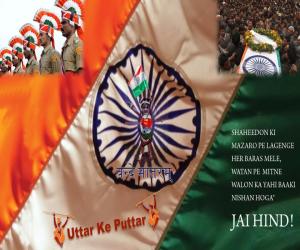 Uttar ke Puttar started preparing for this event 3-4 days earlier. They underwent long (long!) brainstorming sessions to decide upon the kind of activities to be performed on that day. The team captain also shooted a mail to everybody to come in a dress code which should have Saffron, white or green in it, or a combination of these three colors. This mail made every body stretch their head to think whether they have such a dress in their wardrobe or not.

That was not all by UKPs. When we entered into the office in the morning, the office was already decorated with balloons and small flags. Everybody came well dressed as expected by our event organizers. Apart from UKPs, even other house members had done few preparations from their end as well.  The Eastern Tigers team members were wearing ‘Tiranga’ wrist band and all Southern Surmas pinned up ‘Tiranga‘ batch on their dresses. Though that cannot be called huge efforts but sometimes, even small things matter a lot. 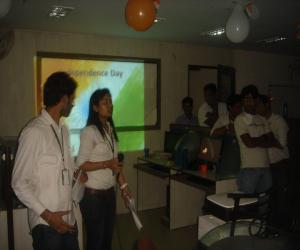 Finally, the time arrived for which every Vinovian was waiting for. Everybody was asked to gather on the second floor and the event started at 4:30 pm. Our very own, Kiran Bisht, was the representative host from UKP. She requested everyone to stand along with their respective house members. Then, she explained about the different rounds of fun activities. All the teams were required to select one representative who would participate on behalf of his team members. In the first round, all the representatives were made to stand in the front  and asked to speak something on the eve of Independence Day. Out of all representatives, Kapil Singh(Vinove’s most humorous character) stole the limelight. He spoke very well and nicely highlighted the hidden meaning of freedom in the modern world. 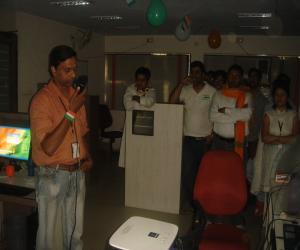 The second round was quiz round. UKPs had prepared one video clip for each house related to India’s history and cultural background. Each team was asked three questions on the basis of the video clips shown. It was just an absolute fun for each team answering all that questions when the opposition parties(other team members) were prompting wrong answers. Some were finding the answers on Google on the spot (Cheaters! You need to read newspaper daily and improve on general knowledge). Never mind! After all it was just for fun sake. 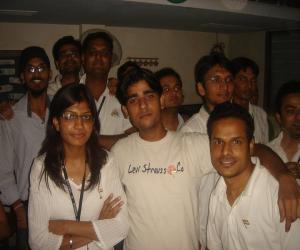 At the end, came the turn of the event organizer i.e. Uttar ke Puttars. To everybody’s amaze, they answered all the three questions correctly and declared to be the winner of  game. Impatient and full of jealousy, the rest of the Vinovians, started yelling by calling them ‘Cheaters’. Everybody was having a good time and some were busy passing comments on other house members. The situation was made under control somehow.. Parvesh Aggarwal, Director of the Company, member of Western Yodhas(Oops..The Loser team!), concluded the talk by saying, “We are satisfied with what we got..atleast we have not cheated in the game”. But still the commenting, defending and the laughter sessions were full on. With all masti, excitement and Dhamaal, the event came to an end.

Film abhi baki hai dost…No event is complete without some refreshments. And to keep this tradition alive, there was a small snacks party which everybody enjoyed a lot. At last everybody returned to their desks to finish up the pending work, with memories of the celebrations in their hearts.

These kinds of fun events actually act as great stress busters, mind refreshers and break the monotonous chain of work, work and work. I think all corporate should make these fun activities a part of their culture. This will automatically work in favor of organization’s stress management endeavors.