“Can’t hardly wait…
to raise the toast with taste.
Dancing to the tune,
would be the Vinovians’ cocoon.”

The first two weeks after the announcement for the Fun Event were the most difficult days. Undoubtedly, they were filled with excitement to dance and drink hard. Western Yodhas had announced a Dance Party on the July 24th , 2010 as a part of the Fun Event @ Toast in Rajouri. The date had already been postponed for a week and that added fuel to the fire.

Nevertheless, the day came and the Vinovians made way for the venue. Manjeet and Sandy, had already reached the venue in order to check the arrangements. We, all were warmly welcomed by Toast’s management. The moment we entered, for a minute, we entered into a state of trance because of the elegance of the ambiance. The dim lightning that was prominent enough to add on to the look and feel of a lounge. After a couple of moments, we realised that we are not here to rest when the silence was broken by the rocking welcome of our hosts, the Western Yodhas. 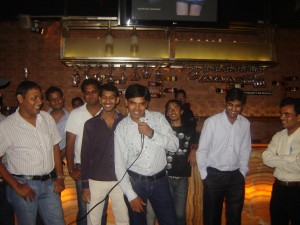 “Aa-mil-ga-mate,” the culture at Vinove to celebrate joining of the new members in the Vinove Family called for the double celebration. This time, our creative ‘keedas’ made the “fuchas” mimic Shakti Kapoor, Hema Malini, Amol Palekar, Gabbar, and every character they could think of. To the best of our expectations, everyone performed really well and even to the worst of their extent. Then, the call opened the bar and the floor as well, and everyone just made a bash towards it.”

There was everything… for all our alcoholic and non-alcoholic jawans! Some rushed to the bar to get their drinks, while some were rocking to the tune. Meanwhile, there was an announcement for the paper dance where our five “hanson ke jode” in their full zeest tried their level best, but Sweety and Venkatesh was the last couple to be on the floor. Each and every couple was mesmerised by the music and the proximity they shared. Then, came the real-time teaser where Western Yodhas have had decided the most weirdest titles one can ever think of.

“Vinove Dada” for our Bossy Boss (I am sure, this would be an another title from my side :-); Talli Hua/i to Vivek Avasthi and our dearest HR- Bhavna (Zoinx…). There is still more…. One Pack Man to Sanjiv Singh (and I guess… that would surely have been a one-man nomination) and X-ray man to our little Chandresh.”

And, there again, loads of dancing, drinking and enjoying, and why not… when you are with your colleagues with the spirit of knowing each other well. And, I am pretty sure, we went so high in the wake of dancing and masti, that we did not want the music to stop. However, we had to stop and move ahead for lunch, and had a loads of chit-chat at the lunch table as well. We clicked loads of photographs and made the day memorable.

And, this is the most happening thing about this office that we find or more appropriately, create events for one or the other get together. These in-house activities, Fun Event have become an indispensable part of the Vinove family and a big thanks to Western Yodhas, Parvesh Sir, Bhavna, and all the Vinovians for such a rolling and swaying party.