After the “Vinove sports league 2011” hosted by Vinove on 12 February 2011, Western Yodhas took over the charge for holding fun events in Vinove for the next couple of months. So, the first event was Holi celebration. It was a small get together held in company premises but after a couple of weeks Western Yodhas announced yet another fun event i.e. Picnic. But how come picnic in summer? Well, that was the perfect time to beat the heat this summer, so the picnic spot decided was Fun ‘N’ Food village ( Amusement+Water Park).
As temperature was rising, it was time for some splash and fun. The day, the announcement for Picnic was made, everybody was filled with excitement, making their own plans and many more. It was held on 16th April 2011 as the most awaited picnic @ Fun ‘N’ Food Village.

Finally the day came and the Vinovians made way for the venue. All Vinovians were ready to board the bus that were to take them to the picnic spot i.e. Fun ‘N’ Food Village. Well, all these arrangements had already been made by Sandy and Manjeet. Sandy had reached the venue in order to check the arrangements. As soon as we entered the venue, all the Vinovians headed straightaway to the cafeteria for the breakfast. Once, we were through with the breakfast, without any delay all moved to the water park where they enjoyed themselves to the hilt. All were excited and very hastily they changed and moved to the water park. The water slides, lazy river were crowded with the Vinovians and with the general public as well. After that we all enjoyed together in the wave pool and swayed to the music and had a blast. This is not all. Meeta and Komal from HR department won the rain dance competition. 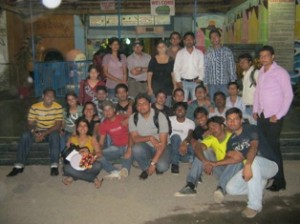 The merriment had to take a break, for what is a picnic without the eats. A sumptuous lunch was followed by enjoying the variety of rides in the amusement park. We also had loads of chit chat at the lunch table. Few people didn’t like the rides so there were other things to keep them busy. They played cards, flying disk and many more. After taking rides, majority of us took part in game i.e. the sack race. The winner of sack race was Avinash Kumar Mishra.

Like all good things have to come to an end, so it was time to click loads of photographs and make the day memorable. At the end of the day, the wide smiles of all the Vinovians portrayed their feelings, that they had truly enjoyed a fun filled Saturday. These in- house activities, fun events like party, picnic have become an indispensable part of Vinove family. A big thanks to Western Yodhas, Parvesh Sir, Bhavna and all the Vinovians for such a rolling and fun filled Picnic.