When we think about sports and games in a life where we are busy with long working hours, we probably think about college students or school kids fighting out on their favourite sports. This is the time when merely the thought of Sports excites everyone of us. So we actualized this thought by organising ‘Vinove Sports League’ that continued for over a month. The main attractions of ultimate Vinove Sports League were Cricket tournaments and Relay Race competition along with Badminton, Football and various other games.

This was an initiative taken up by Vinove to ensure that people working in the company do not only bind themselves to work but also get a chance to relive other dimensions of their lives. Through these interactive sports activities and team building events, they got a chance to reiterate their childhood days in fun filled environment inside and out, which is required by them to work with more enthusiasm along with fun.

Vinove is an organization where we do take care of our employees in terms of fulfilling their necessities whether it is about fun, refreshment or any other. How many of us, in spite of having passion for cricket deep inside our heart, could never get a chance to play on the level field after school or college? Well, Vinove Sports League gave us all of that.

Nevertheless, Cricket has always been the most exciting and most popular match among all. The tournament was played on a league-cum-knock out basis where we had four teams, namely Uttar ke Puttar, Eastern Tigers, Western Yodhas and Southern Surmas vying for the ‘Winner’s Trophy’. Also, we had Relay Race Competition among the four teams. It was understood that winners of semifinals will play final.

The first cricket match was conducted between Uttar ke Puttar and Southern Surmas in which Southern Surmas won the match. And Uttar Ke Putter was the winner of Relay Race. Every player has made an important contribution to the team. While the match was on, other members who were not the part of any of the teams were still found in full spirit as they were shouting, cheering, and boosting up their team members. Rest others were busy in playing Football, Badminton and Frisbee.

Then came the day when we had our final cricket match between the winners of semi finals, Eastern Tigers and Southern Surmas, and the final Relay Race competition between Eastern Tigers and Uttar ke Puttar. Teams participating in finals believed that campaigning was essential in order to survive or defeat the opposite team and to boost up the moral of their team players. Though the spirit of the game involved respect for opponent teams where all the participating teams were looked enthusiastic, all set to take the challenge of the opponents. 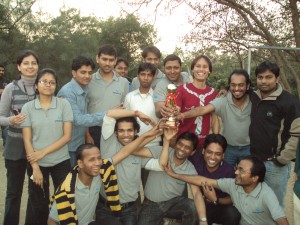 In the final, Eastern Tigers made 175 runs for the loss of two wickets, defeating Southern Surmas by 40 runs, whereas Uttar Ke Puttar went on to win competition by defeating Eastern Tigers in the Relay Race. Eastern Tigers took home Winner’s Trophy with accolades and Uttar ke Puttar got medals. 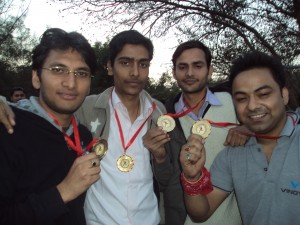 After having reflected the overwhelming response from increased number of participating and enthusiastic members, Vinove has planned to organize more events as part of Vinove Sports League in the coming months.